Old life-planning image that Jaimee Jaimee’s Coffee With Jaimee – getting unstuck radio show made me think of.

Just started listening to the first couple of episodes of Jaimee Finney’s new live radio show Coffee With Jaimee – A Show About Getting Unstuck and have been enjoying it quite a bit.

In these first two episodes Jaimee talked about writing down what’s most important to you in your life in episode one, and then talked about writing down your big bulky desires or goals in episode two. This reminded me of something along these lines I did in early 2001 (?). Sharing it not because the content is particularly interesting, but to illustrate that “write down” doesn’t necessarily mean making a list in the usual way. My thought was that perhaps this might help someone feel free to diagram these things out in a way that organizes them by modality, or topic, or location, or whatever works best for them and to remind people that it doesn’t have to be a linear list.

I redid this later and it got a bit more concentric circle oriented, but the shape is just whatever way helps you evaluate the relative importance of things to you, your life, those you care about, and so on, so I’d recommend not letting yourself be constrained by what I or anyone else has done.

(slight redaction to remove names of products and people as appropriate)

“A Legend Awakens” in the Tengwar script written using a Fraktur black-letter calligraphic style, by Geek. A snow day project. 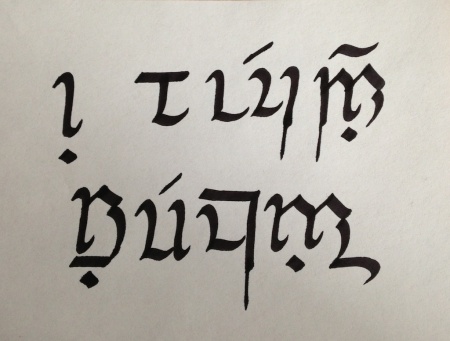 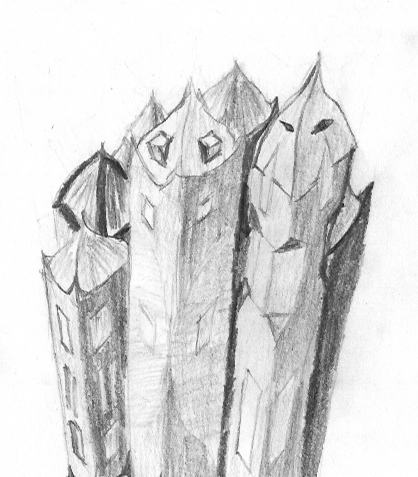 I was playing with three-point perspective (see Wikipedia), and decided to make this quick test piece of a city of towers, and post it here for people to see. Enjoy!

It’s the year of the dragon, so I decided to post another dragon drawing (click for full size): 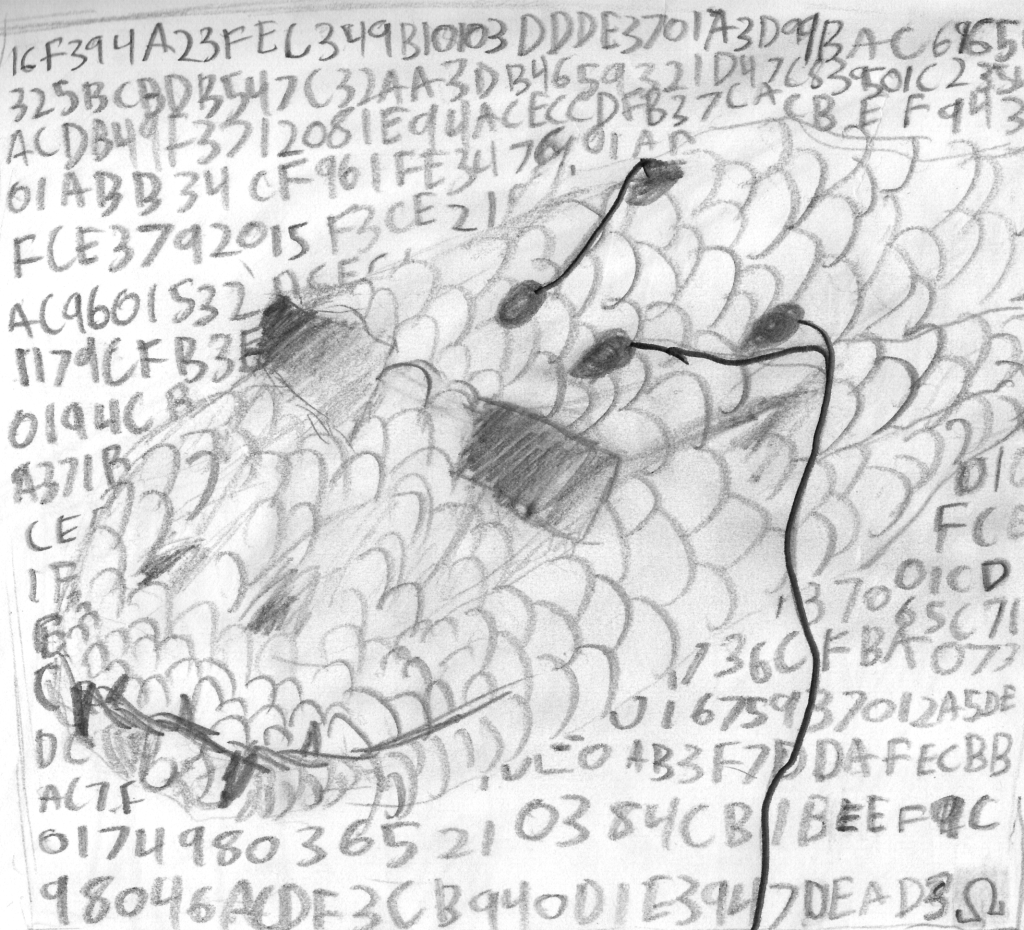 This dragon is fully modernized with brainwave readers and mirrorshades and ready for the cyberpunk future!

Just a quick sketch I did on the back of a care package we sent to Geek at camp.  Really tough to draw with ballpoint pen on one of these bubble pack envelopes (and a re-used one at that!).  Yah, I should have thought of this before I was sitting in the post office parking lot with only a ball point pen handy.

It’s supposed to be some kind of fantasy bad guy in light armor.  Spikes on gauntlets and toes of boots, war ax with hammer on backside.  you get the idea.  Rough with no pre sketch with pencil etc, and it shows. ah well, likely to make him smile and that’s what matters 🙂 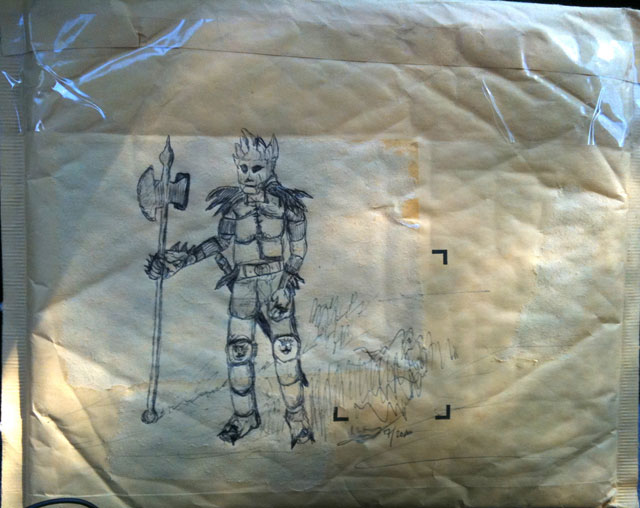 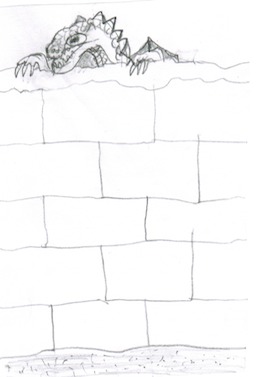 New picture – a baby dragon hatching from its egg: 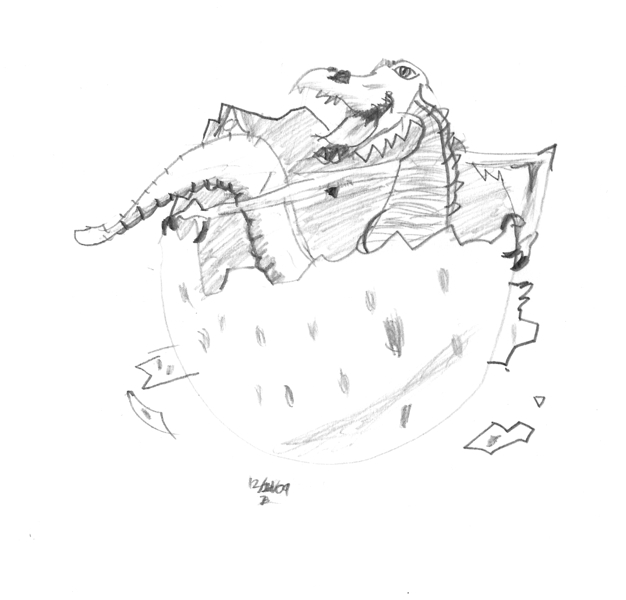 A gift for mom for her birthday.

A forever flower, or in hawaii pidgin, “fo’ eva flower” (or something like that).

First color drawing in decades, clearly some skill to (re)acquire..

to finish it out.  I tried some Faber-Castell Color Pencils “POLYCHROMOS” but I only have a set of 36 colors and it just didn’t have the right colors for an Iris while the 48 pencil set did. There is a nice Prismacolor Pencil – Thick Lead 96 Piece Set

that I might upgrade to sometime, but they aren’t inexpensive….. (!)

to help G&D with all your amazon purchases).

Here are some from Geek’s daily drawing notebook.

First, two inspired by our visit to the Escher exhibit at the art museum:

And a picture of the crayfish Geek caught and ate with help from his cousin on a recent visit to WV:

Some pictures from Dad’s daily drawings:

First, Dad of Dad suggested that the left side wall corner didn’t “read” right in my old house picture.  Basically, he called me on not finishing the drawing properly (I had spent enough time on it and wanted to move on and so I stopped when I knew it wasn’t really “done” – busted!).  So here’s what it looks like after I “fixed” that problem (though I still didn’t spend as much more time on it as I ideally would):

Here are a couple more sketches:

Excerpts and links may be used, provided that full and clear credit is given to Geek And Dad, LLC. with appropriate and specific direction to the original content.

“Geek And Dad” and “Geek & Dad” are trademarks of Geek And Dad, LLC., All Rights Reserved.