Today Geek completed the second half of his two-day Black Belt test in Taekwando.  Pretty intense test but he made it through successfully.  Here’s a photo I caught as he successfully performed his Power Break – two 8″ boards at once: 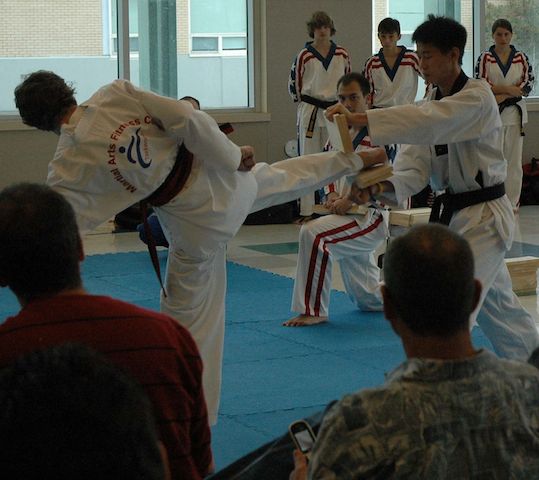 He had to take on a black belt and the largest poom belt at once in the sparring part – pretty intense!   He rocked on the terminology part, answering things others got stuck on correctly and with confidence.  His forms were good, little weak at first due to nervousness but all his hard work over the last 3 weeks really showed.

Gave Geek his Black Belt Test Accomplishment gift: I made him a custom belt and weapon display/storage rack:

He was pretty psyched – yay! 🙂

4 thoughts on “Geek gets his Black Belt!”

Excerpts and links may be used, provided that full and clear credit is given to Geek And Dad, LLC. with appropriate and specific direction to the original content.

“Geek And Dad” and “Geek & Dad” are trademarks of Geek And Dad, LLC., All Rights Reserved.